You heard of Copacabana, but never of Paris Plages ? You have to come to Paris to see that sandbeach on the bank of the Seine River. Every year, Paris City Council have several tons of sand spread on a Paris Quay for a month. Many quays are usually closed during the summer to enable pedestrians to relax and walk around freely. 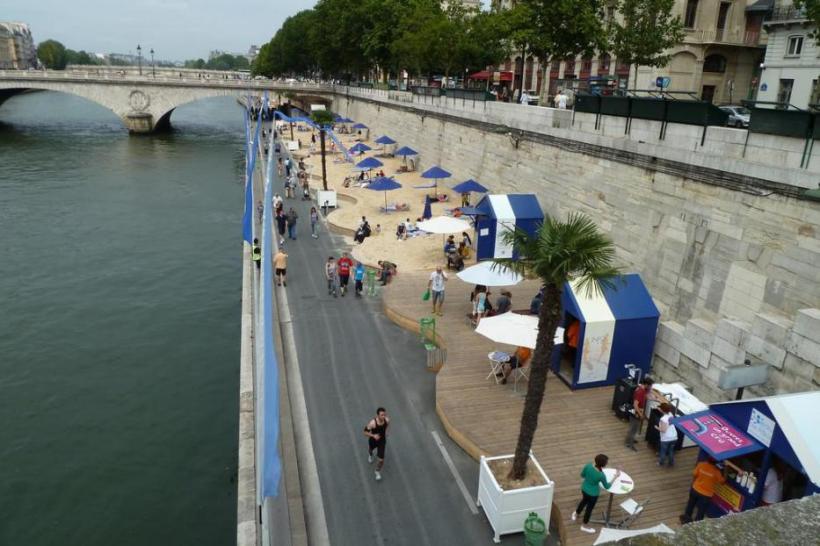 Paris Plages in the morning ( source: my dad)

Here we go for another summer at Paris Plages.

This « Paris Plages » is not to be mistaken for the Le Touquet – Paris Plage ( see my previous post), which is located in the North of France, on the seawaters of the Channel.

The previous Paris Mayor tried to sue Le Touquet City for using the name, but to no avail, as Le Touquet invented the name last century.

The big building beyond the double deck bridge is the Ministery of FInance, Tax , etc. We call it  » Bercy » like the Paris area of Bercy.

Here, no chilly swim is possible. The only bath you’ll take is a good sunbath. The Seine river is forbidden to swimmers. The Seine river is too polluted in Paris and there is too much boat trafic to be safe. You do not want a bateau-mouche full of tourists to drown you.

However, not to worry, Paris City has displayed games and attractions so that kids and adults can relax and have fun. Paris Plage is free and accessible to everybody. No need to be in a bikini to walk along Paris Plage.

You can have a glimpse at Parisians sunbathing and reading magazines in long chairs, or get some fresh water sprayed onto your face. You can sit, you can lie down, you can play with the sands like a 5 year old. Up to you. 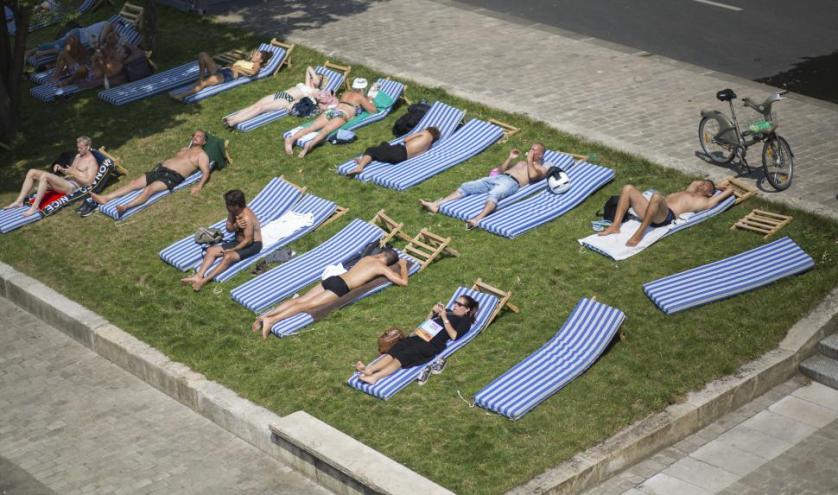 I suggest you should bring sunblock cream, hat and sunshades, as well as towels for health and hygiene purpose…

It starts at Metro Louvre Rivoli ( Line1)  and goes up to much beyond the Ile de la If you want to start by the Eastern part of the beach , go to Metro Riquet ( Line 7 ). The esplanade in front of the Paris Hotel de Ville has a beach volley field as well.

You can play beach volley, but also eat , drink and sleep. There are  food and beverages stalls and long chairs. The food rates are supposed to be reasonable as the City Council will not let them invoice exaggerated rates. Paris Plages is supposed to bring some summer holiday atmosphere to Parisians unable to afford vacation out of town. 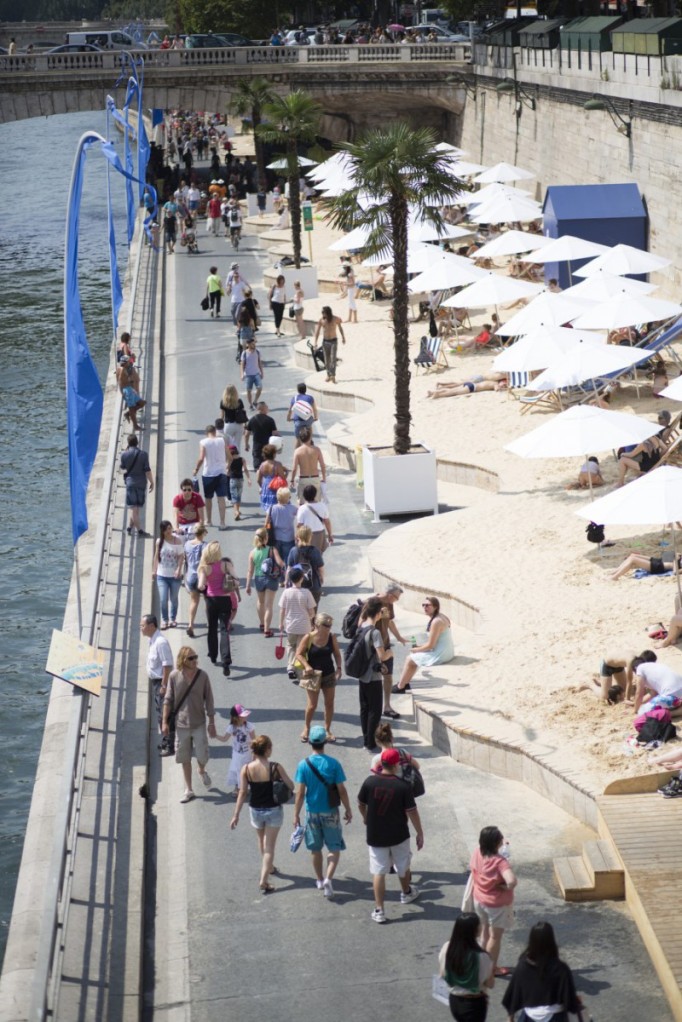 Many people actually walk by just for the pleasure of watching the facilities and the people !

Kids have specific games areas and attractions. There are some Paris City employees looking after the kids as well.

You can go there in the morning for a warm up, in roller blades, or jogging. If you want to have a glimpse at the beauty of Paris with a minimum of  moody Parisians and smelly cars, visit Paris in August, especially in the 1st fortnight ! But after July 15th, there are fewer Parisian workers around, many French workers go on vacation from mid July to mid August.

There are several double deck bridges like that across Paris, quite often used in photos and movies.

People are more relax. Watch this blue sky my father caught in the morning, while visiting Paris Plages last year. He likes to walk in Paris during summer time. It is quite easy to walk along the Pompidou Quay along the Seine River as it is closed to car trafic. You can walk from Eiffel Tower to Bercy.

Remember, if you want to see the Pont Alexandre III, alight at Champs Elysees Clemenceau ( Line 1) , you just turn right and walk between the two big museums Petit Palais and Grand Palais. You cannot be mistaken as you will see the golden dome of the Invalides, ahead on the next bank of the Seine river. The Pont Alexandre III is the bridge , a marvel of architecture and romance, to bring you there. The view is amazing. I prefer that one to Pont des Arts by far. 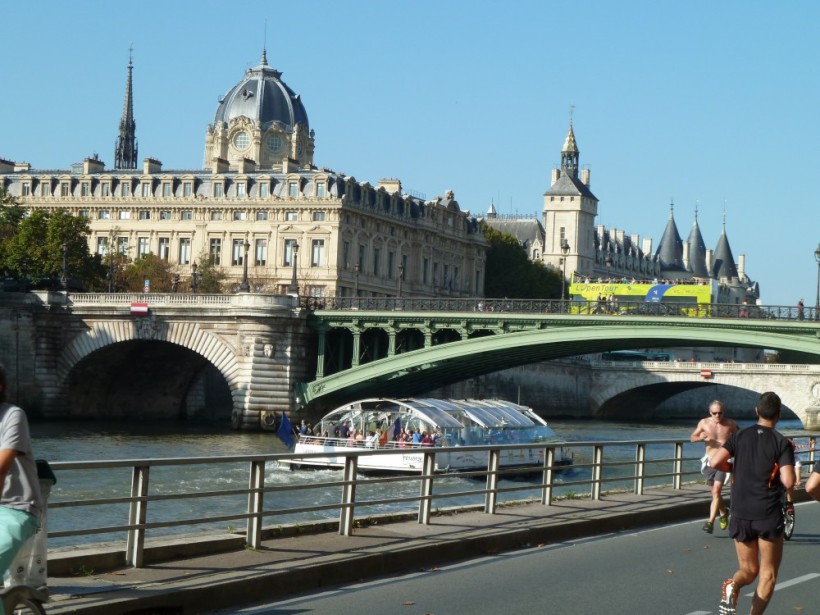 The Conciergerie, Ministery of Justice and Sainte Chapelle along the Seine River.

The picture just above is the view you can enjoy from Paris Plages. If you could not walk from Champs Elysees Clemenceau like my trekking father , take back Line 1 and alight at Pont-Neuf or Chatelet.

A last one, back to Eiffel Tower.

A last one on Eiffel Tower, a all times favourite

To read more on What to do in Paris this summer, click here. You will find all the info on free concerts, free open air movie shows, etc.